1. Your birthday
Today is your eleventh birthday and I wish you a happy, long and fruitful life. Your grandmother and I are glad to join you and your parents, to celebrate the event at the Bethesda home where three generations of our family have already lived.
During the recent flight from Europe, it came to my mind that it is time for you to learn that our ancestors’ association with this country goes far back, much before the arrival of the Mayflower, which is usually associated with the beginning of the American nation. During the fifteen hundreds, as owners and captains of ships commissioned by the Crowns of Portugal and Spain, they explored and mapped the coasts of the New World and, in a disputed footnote of history, one of them actually named California after a beachfront next to Sesimbra, a Portuguese town.
For your birth in Los Angeles, our immediate family came literally from all over the world, your aunt from Washington D.C., your grandmother from Paris and I came from Tokyo. During my night flight, the pilot gave the alert to a stupendous aurora borealis that could be seen while cruising close to the North Pole. That was a grand entrance in life, the stuff from which in the past legends were made.
You were born in the year 2000, of the calendar presently in general world usage. Dates with round numbers are always the origin of much myth and display of ignorance. This time, there were again fears of calamities brought up by the change of millennium and other nonsense of the kind. First of all, dates are by definition artificial, the result of a convention about when to start counting time. Early humans understood easily the succession of days, the lunar cycle and the return of the solar seasons constituting a year.
Counting time always related to an important event shared by each community. It could be a catastrophe, the need for a migration or other seminal occasion. Later, were counted the dynasties of rulers (Pharaohs of Egypt, Emperors of China or Japan), the political turning points (the Era of Caesar), religious events (the birth of Christ or Mohammed’s escape from Mecca to Medina), all representing mythical beacons of their civilizations.
Our calendar started with the conventional birth date of Jesus Christ, a prophet born in Judea, a Middle Eastern province of the Roman Empire. Jesus preached an adapted version of the beliefs of Buddha, an earlier Indian visionary, ideas brought along by the merchants of the Silk Route, on caravans that linked the Mediterranean eastern shores all the way to China. The man and his ideas conflicted with the dominant religions of the Empire, were prosecuted with needless violence, which is always a sure method to disseminate any doctrine, the more repressed the faster the expansion.
And so, here we are, after much fighting between parties organized as tribes, nations or empires, using religions and sects as tools in the endless competition for territory and resources, recognizing with our calendar the permanent interaction of peoples from all parts of the world and their reciprocal influence in shaping each others minds. This is what passes for the history of mankind, a lesson in humility.
Having grandchildren brings up a sense of increased personal responsibility towards the future, the need to have your voice heard and to contribute to the body of reasoned knowledge that is the best bulwark against the barbarism still dominant and threatening in large parts of the world.
Never before existed a correlation increasing so fast, between the overall knowledge and consequent way of life of the most intellectually advanced people or societies, on one hand, and the superstitious beliefs and resulting general deprivation of those staying behind, on the other hand. Add to that the widespread availability of information and communications, the shrinking of traveling distances and you have a large probability of having to deal with continuous confrontations during your lifetime.
One year ago to this day I started this limited access blog, to share with family and friends some memories of past events and the occasional analysis of the present as it unfolds before our eyes. The intention was, that such experiences and opinions could encourage the readers to participate in the discussion of the main issues of our time and the significant changes of which we are a part.
There will be, I hope, opportunities for other letters to you, about family roots and languages, history and legend, science and fiction, politics and economics, doctrine and ideology, religion and bigotry, social responsibility and gullibility, diplomacy and manners, important issues and whatever will cross my mind when I sit in front of a computer. Just have the grace of bearing with me and there is a chance you will not regret it.
JSR
Posted by José Soromenho-Ramos at 1:53 AM No comments:

It just happened recently while in transit between Lisbon and New York. The comment just sprang out of my mouth when the shop’s attendant was returning the change at London’s Heathrow airport: “What do I want this monkey’s money for?”
The answer came with the expression on the woman’s face, which was actually worth paying for. She did deserve the pounds and pennies change for my Euro banknote, as a tip.
Actually, nobody should even care to carry paper money anymore, with the ubiquitous availability of plastic cards. But sometimes it is difficult to break the engrained habit of paying with a bill for a magazine or a bottle of water.
That disparaging reference to any currency other than the dollar as “monkey’s money”, by that meaning “worthless”, came to mind out of the past as a repeated complaint of a former work colleague, one member of a small group that for a while crisscrossed the globe on a most interesting mission, every time we left a country with a pocketful of local currency.
Gil was his name, pronounced “gill”, like the fishes’ respiratory organs. A character, the oldest of the team, stocky, bronze-black skin color, the face and straight shoulder-length black hair of an Indian chief of Hollywood’s golden age. Ah, and blue eyes. According to him, inherited from an Irish-American earlier colonist who had lassoed an Indian woman for a wife. Their child married a former slave from Africa.
“All these lucky events to a produce a distinguished American specimen like myself”, he would say before happy hour at one of the multiple hotels where we stayed. Later in the evening, after sitting at the piano and singing a couple of his favorite operatic arias, his glass of bourbon kept full by thankful bar managers, he would go straighter to the point and invite any single women still hanging around “to find out how such a mongrel was made”. There was usually no lack of takers to the offer...
The man had been married to a famous opera singer of the seventies and eighties. While helping her to repeat, he memorized entire librettos of Wagner’s operas and thus considered himself a fluent german speaker. His tentative conversations with miscellaneous and unwarned Germans, puzzled by the vocabulary and accent, were pieces of laughing legend during Company parties.
These reminiscences were brought up with the belated understanding of how Americans felt in those times, which explains why they would utter such naive enormities. Coming from a nation the size of a continent, with no political borders and the same currency, the rest of the world looked intricate and backward.
Now, those living in the Euro zone have the surprise of feeling the same way when traveling around. How strange it was to have lived before in a fragmented Europe, in that distant and dark age when people had to change currencies and use passports to cross the borders inherited from a barbaric past of tribal warfare. These days, have Euros and you are welcomed everywhere. Just stick to the plastic cards...
The new generations do not even understand why some European countries still remain outside the Euro. The older generations may understand the reasons but do not forgive the shortsightedness of the politicians responsible. Some countries within the Euro zone have economic and financial problems, but this is one consequence of the Euro’s success as a strong currency. Not being able to manage from the center, the abuse of that success by some stray nations at the periphery is due to the present lack of both vision and sense of opportunity.
Giscard d’Estaing said, when presenting the draft of an European Constitution, that those responsible for their approval would get statues in their countries’ squares named after them. Unfortunately, very few of the present European statesmen and stateswomen will deserve such recognition.
JSR
Posted by José Soromenho-Ramos at 3:34 AM No comments: 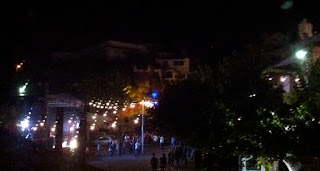 Caged Albatross - Commentary, notes and other collected musings.
Tempos Em Sepia - Memories, not necessarily biographic, starting when photographs were in sepia.
The Fortuitous Hai Mousai / As Musas Fortuitas - Muses, as they wake up fortuitously, by eclipses.
A Gaiola Do Albatroz - Chronicles, the misadventures related to the restoration of a manor house.

José Soromenho-Ramos
The albatross (the largest of sea birds, family Diomedeidae - the companions of Diomedes) belongs to the endless horizons, the trade winds and the waves of the open blue sea. In the days preceding the discovery of the world, they were called "birds without feet", those living in the clouds. They were part of the ancient mythologies, the imaginary creatures of unknown lands and seas. (Albatross, from portuguese alcatraz, from arabic al-ghattas, sea eagle).